Top Tips for getting your kids into Cosmic Kids videos

There are now lots of kids who do Cosmic Kids yoga regularly and there's lots of ways to get started. If you’re a parent who wants to encourage some Cosmic Kids in your house, you might be able to glean some tips on making it happen here:

If you can, provide a yoga mat. It's a special place for them to do their yoga, and much more comfortable than a wooden floor.

Let them pick their favourite episode

Getting your child involved in selecting the episode they want to do is a really effective way of encouraging the yoga to happen. We have an episode list in a PDF format here - you can flick through all of them and click through to the episode on YouTube. 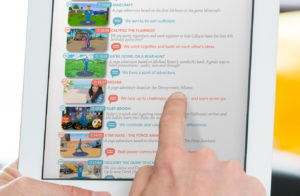 A lot of parents use Cosmic Kids before bed. Its a great way of winding down ready for sleep. In the negotiations before bed, a number of kids we've heard about have realised they can extend bedtime by half an hour if they spend it doing Cosmic Kids...

Why not do it together?

Cosmic Kids is quite a workout for grown ups too - and a great way to encourage your kids into it. If you're along side them showing them how to do it, they'll value it even more.

Family yoga. Even babies can do it!

Get a fan round

Start it at school

Many new Cosmic Kids fans start at school, and then come home and ask for it (often to quite mystified parents!) We have also hear many stories about parents whose kids do Cosmic Kids at home telling their teachers about it so that it becomes part of the school day.

Cosmic Kids Yoga is so great! My kids love it and they work so much better afterwards! We use it everyday after lunch. #cosmickidsyoga #yogaforkids #iteachfirstgrade

Have your own yoga practice - and let them have theirs

Many kids get into Cosmic Kids because it’s their equivalent of their parents’ yoga practice. So while mum or dad might enjoy Yoga with Adriene or Yogaglo or similar, this is their own special version. They can be like you, but in their own special way. We know of quite a number of parents who do their yoga at the same time as their kids are doing theirs.

Let them just watch if they want to

Every child is different. Many children love it immediately: you just put it on on and Jaime takes it from there. They’re up and moving. Some take a little longer to get into it though. They enjoy watching for a while and just do the occasional move. Let them. It’s part of the process of familiarisation. It can feel strange to be moving around in front of the TV. Also, some of the poses are quite challenging. It can often be several weeks of this (especially among 2 to 4 year olds) before the movement becomes part of their repertoire. Let it happen at the speed it needs to happen.

The pacing of Cosmic Kids can be a little brisk for some kids, especially when they first start. Jaime is always trying to strike the balance between keeping the kids attention by keeping the story moving, and making it steady enough for them to participate. We have created a playlist of the steadiest yoga adventures here - pick from these to help a new Cosmic Kid into their yoga.

The Cosmic Kids App is live!

Hi everyone! We've started a new series - Yoga Pose Universe - which is all about the yoga poses. I offer a little more depth on how to do poses and what their benefits are - and I'm joined on […]
Tags:

Jaime at The Brighton Yoga Festival

This Saturday we're at the Brighton Yoga Festival at the Sussex Country Cricket Ground in Hove. Please come and say hi. Jaime's doing Star Wars LIVE at 12 noon on Saturday in the Music Zone and then at 2pm she's doing […]
Tags: Cosmic Kids

Shopping cart0
There are no products in the cart!
0

Please wait while you are redirected to the right page...