Hello! Jaime here... Today, I want to talk about helping your child have better self-esteem.  We all know, language is a powerful tool. Using it mindfully can make a world of difference to how your child feels about themselves. Even the most confident child will experience moments in life when they’re not sure if they feel they can overcome a challenge. There are lots of other instances that can dent self-esteem, a bad day at school, being nervous to take part in an activity where they might be in the spotlight (school play, a reading in assembly for example).  Or simply feeling nervous about taking a big step; starting a new school, going to a new after-school group, meeting new people - all of these can make a child feel nervous and a bad experience can destroy self-esteem in one hit! 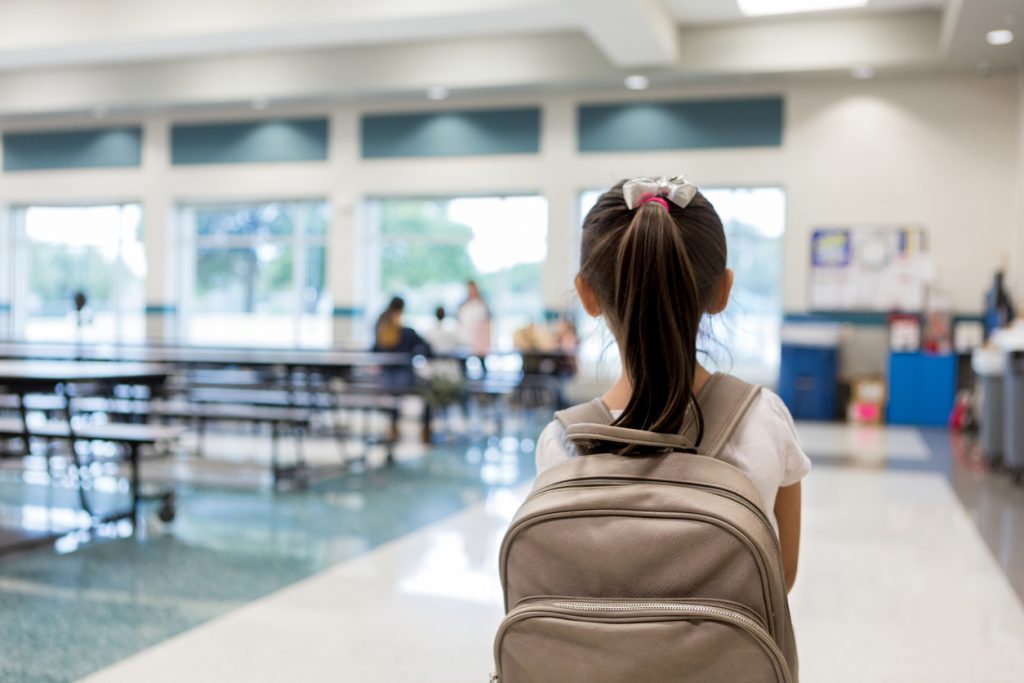 Luckily, self-confidence is something that can improve with time. Parents, teachers and other adults can especially help with self-esteem too.  Yoga for kids is just brilliant for calmness and serenity, it’s great for relaxing, easing anxiety and overall positive wellbeing but there’s are other things you can do too, to give your kids a positive outlook on life, and to make them feel comfortable, confident and ready to take on anything! Language is one area that can raise self-esteem, confidence and courage.  So, with that in mind, I thought you’d like to read our pretty amazing language hacks that help kids’ self-esteem.  Getting used to adding a few of these little gems into conversation can make all the difference…try a few and see how inspired your child is as a result.  We’d love to hear your views too.

Maybe you remember your teacher telling you there’s no such word as 'can’t' when you were a child.  Well, there’s some truth in that, except if your child says they can’t do something and they’re downhearted about it, try adding the word “yet” to the end of that phrase?  Perhaps they can’t ride a bike but their friends can. Or they haven’t yet mastered their six times table. They will obviously learn to do it at some point, it’s just they can’t do it yet.  That’s a positive way of turning around a negative phrase because it teaches the power of patience, inspires self-belief that they will be able to do it – at some point in the future.

Leading on from the previous hack, if your child thinks that they can’t do something, ask them what they can do?  Maybe they’re not quite there with learning a new skill but that skill is a journey like everything else. Find out where they’re at on that journey – by asking what they can do.  Then, move it on by telling them they can do hard things, remind them of a time when they couldn’t do something – and how one day, they just could!  Next, offer your help, by asking them “Can I help you?” you’re motivating them to try again, with your help and you’re being positive about the task at hand.  You’re explaining they’ll get there with persistence; you’re encouraging them to keep on going by showing them how to move forwards.  Once they’ve accomplished the task, ask them how it makes them feel.  Celebrating their success raises self-esteem.

That takes us to the next language hack!  Being brave is something children have to do right into adulthood and beyond.  Telling them how brave they are gives them courage to do something, at the very least to try to do something.  Children like hearing they’re brave, it makes them feel invincible so whenever they try something difficult, or even painful (like standing up to another child who’s been unkind), tell them how brave they are so that they know, whatever the outcome, they’ve got the courage to face anything. 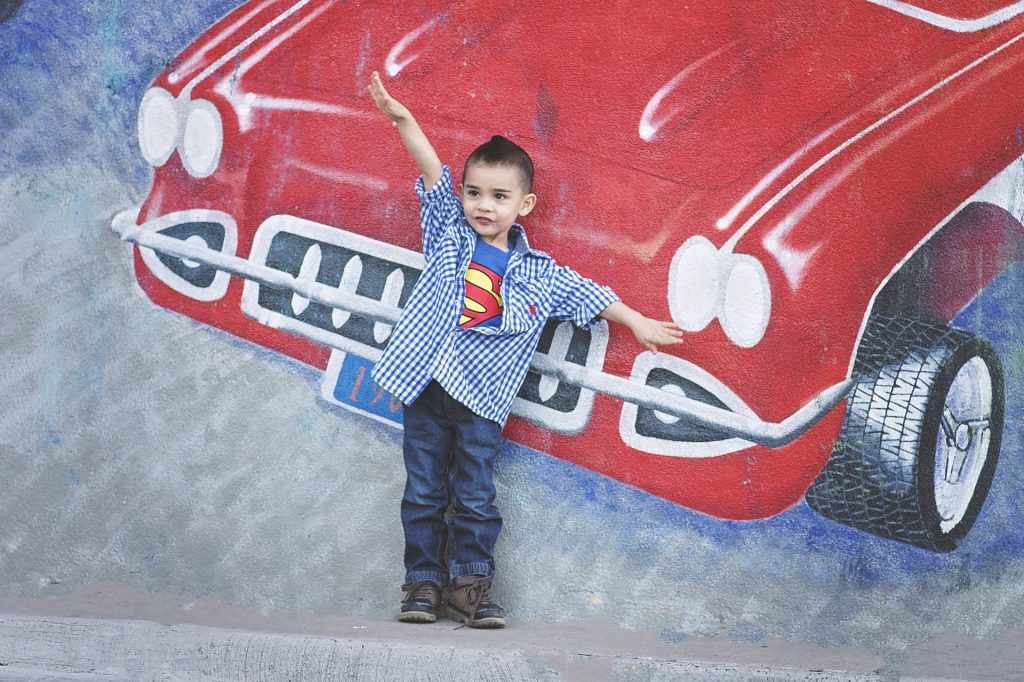 Image by Denise Husted from Pixabay 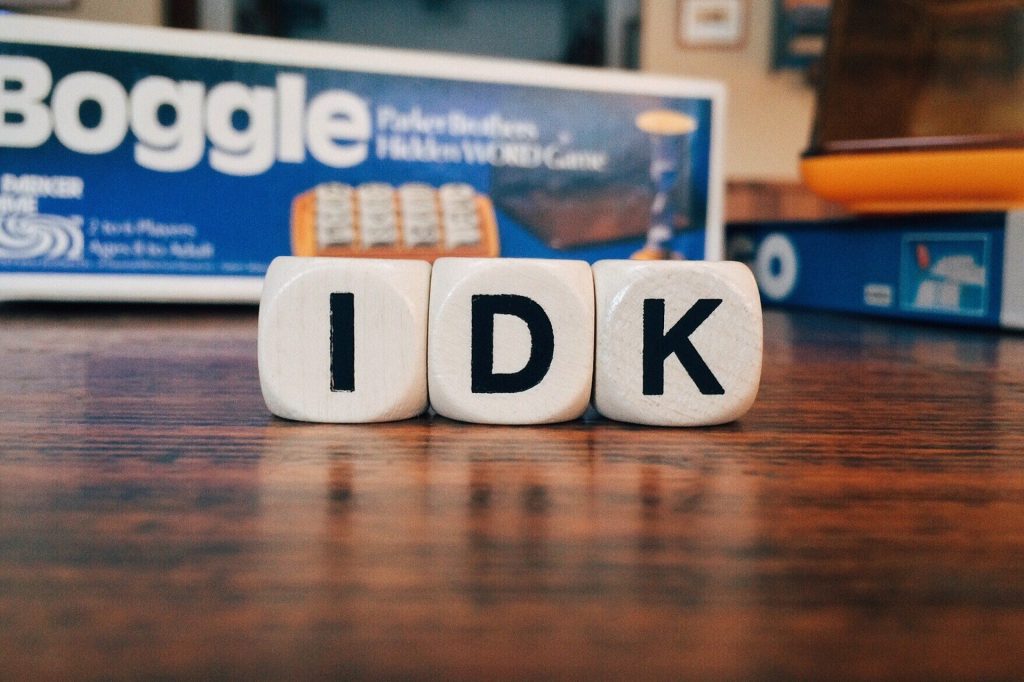 Image by Wokandapix from Pixabay 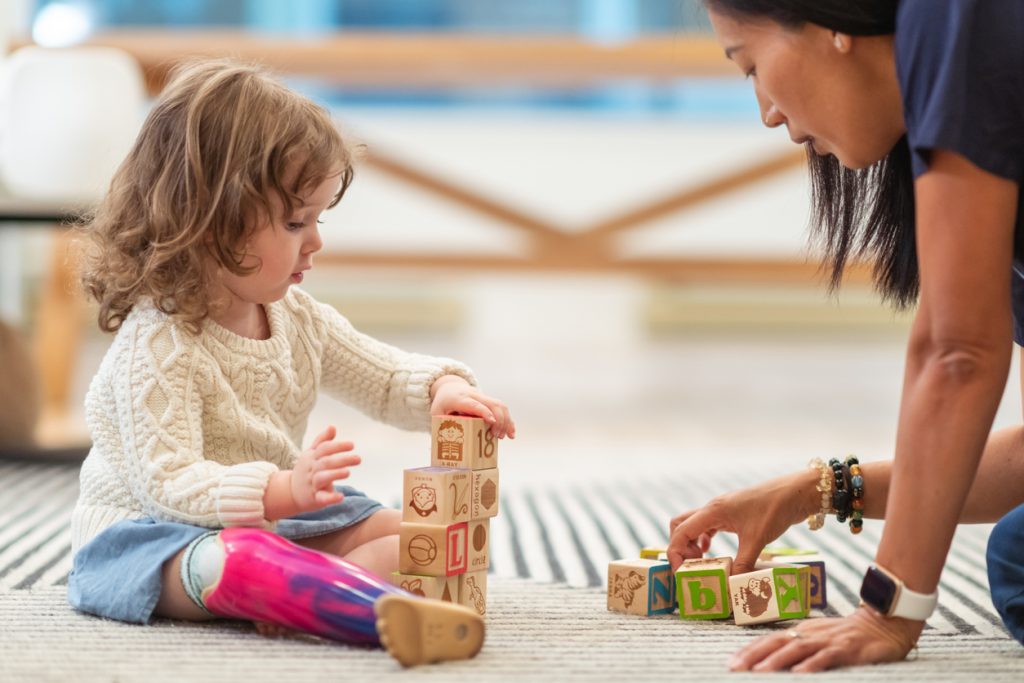 When your child is frustrated and finds something challenging – don’t be tempted to say “It’s not that hard”, no matter how easy the task at hand is.  Simply spinning this one and saying “You can do hard things” inspires confidence so your child believes they are capable of whatever it is they’re trying to do. 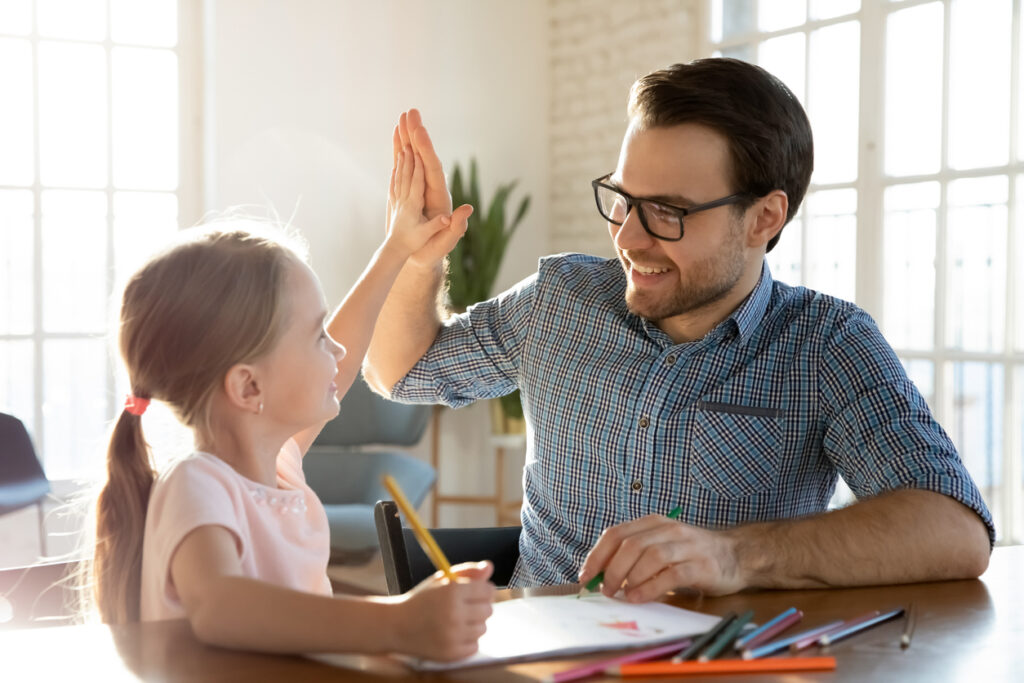 I don’t have to tell you that telling your child you love them, no matter what, is without doubt the most positive, powerful phrase you can use.  So, it’s not really a simple language hack and you might be thinking that it goes without saying. However it’s important to actually say those words, daily, especially when your child feels a little lost or unsure.  Using the word “I” is also hugely important.  Don’t just say “love you”, it’s a little throwaway, say I love you – it has more meaning, it’s reassuring and it comes from the heart! 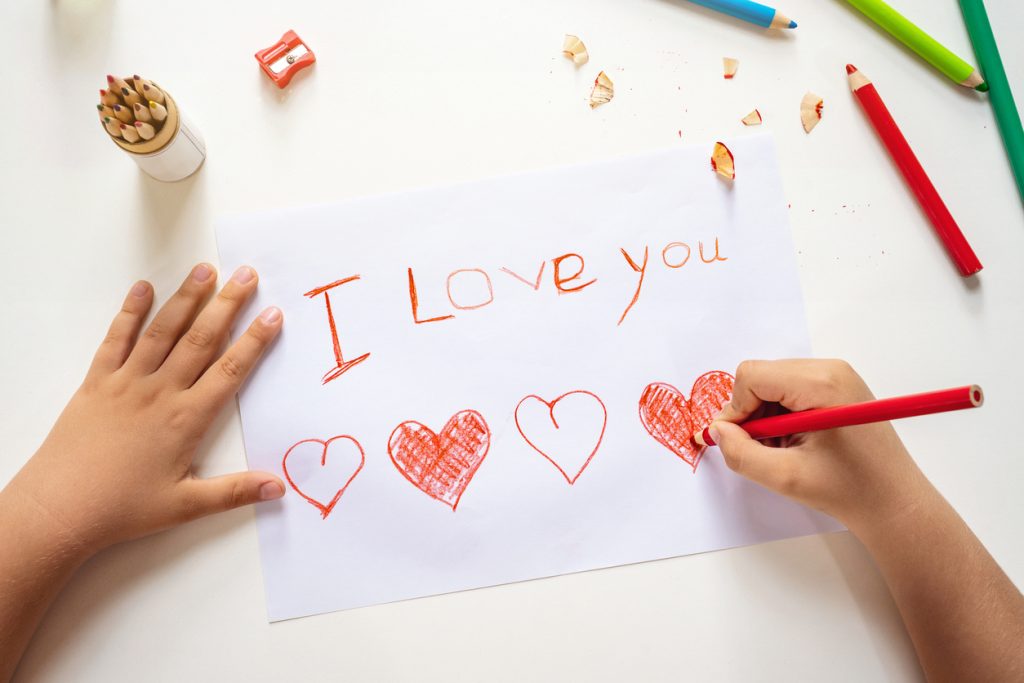 Jaime
I look after the writing and performance side of our videos - making the yoga and mindfulness fun and silly, as well as safe. I also manage our social media, and look after the community of independent teachers who do our training. It's amazing how things have grown and I love coming up with new ideas, having fun with it, and seeing where we can take Cosmic Kids next.
Share the love

Inversions in Yoga - Kids Yoga Goes Upside Down Too!

An adult yoga class is full of inversions - Downward dog, wheel and standing forward bend crop up all the time. But when it comes to standing on our heads or trying out a handstand we adults can get a little […]
Tags: handstands, headstands, inversions, Kids Yoga, teaching kids yoga

Kids Yoga 'Posture of the Week'

Posture of the Week is brilliant. It's basically a video of Jaime showing how she instructs each kids yoga pose - every single week. This means you can learn how to teach that posture well - or your kids can […]
Tags: Kids Yoga

All our videos are on our App! 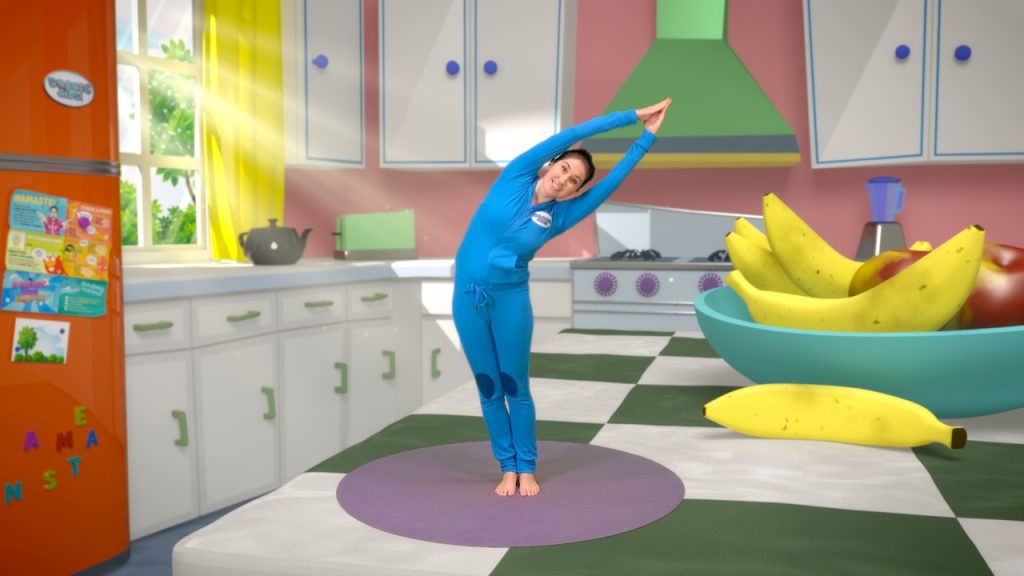 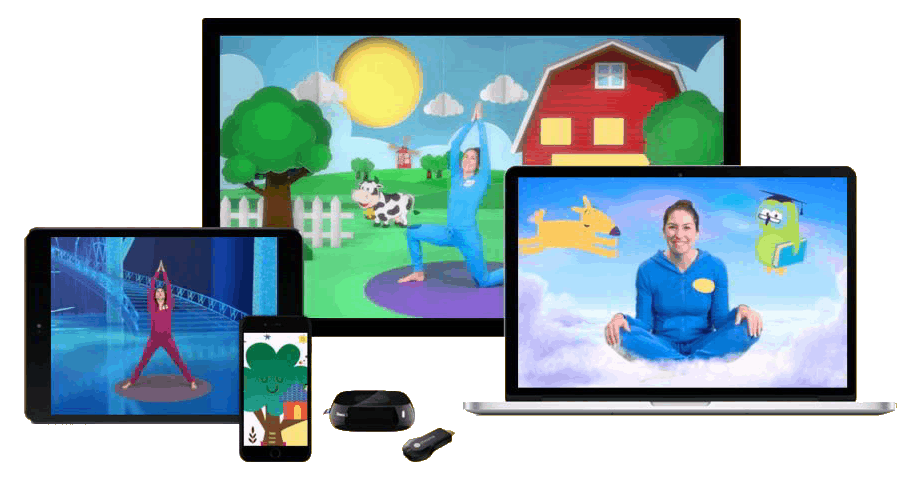 Try it free for 2 weeks

Try it free for 2 weeks